The Spirit Of Combat

The Spirit of Combat 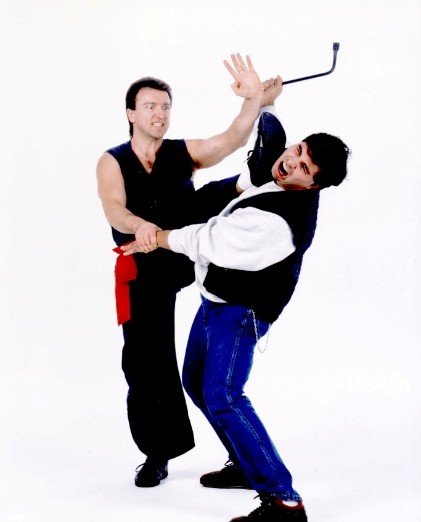 In any undertaking, you can move only forward or backward. Stagnation is death, therefore, staying still is not an option for those who value excellence. This holds true in the martial arts. Most martial arts systems/styles have, in my opinion, lost most of their combat effectiveness. This is not necessarily all bad as it has given the martial arts community, sport and forms competition, providing enjoyable recreation for thousands. As well, from all styles come some people who are simply naturally gifted fighters and would be so regardless of the style they studied, therefore, I’m not implying that sport styles never produce good fighters. Sport/Recreational martial arts training however is as far from true combat effectiveness and street practicality as fighting a war with Nerf Darts and Water pistols would be.

If he would simply look at the words, “MARTIAL ART” he would plainly see the error in his thinking. Martial Art, by its name implies a fighting art/science. I think that often instructors who have limited fighting skills will play down the role of fighting in their teaching. If someone says that fighting, in martial arts training is unimportant, you can read between the lines. They are probably saying that they can’t fight. At my age (64), I still spar with my students (Contact Sparring). It’s great fun and it shows students that I practice what I preach.

Every martial arts aim should be to enhance the quality of the lives of its participants and to build character and self confidence regardless of whether it is a sport/recreational venue or a combat system. The fact is, the ability to provide for one’s safety and security is an important vehicle in reaching these more altruistic goals. There are arts that attempt to accomplish gaining this self appreciation and awareness without fighting (e.g. yoga etc.). Martial arts accomplish this through combat principles and philosophies as a microcosm of life. That is why they are called “Martial Arts”.

It is my belief that there are many instructors who genuinely believe they are teaching a workable combat martial art when in fact they are not. Few martial arts instructors have been in true life or death fighting situations. I have. (NOTE: I have fought in Bare Knuckle Matches, worked as a Bouncer and as a Bodyguard and have had many street encounters in my sometime misspent youth.) Most instructors are teaching purely from academics with perhaps a couple of fights on the school grounds in their youth. The instructor of the instructor passed on to them applications he or she said will work and they in turn pass it on to their students. Nobody questions how the person knows that it will work. Training is rarely put into a real street context. This is how unworkable applications are passed down for generations. Often, applications that seem to be plausible on the surface, and that may work well in a controlled environment where students are cooperating with each other, will not work at all in a real situation.

THE NATURE OF A SYSTEM

In order to be a truly competent fighter you must understand the nature and principles of your system. Having had the opportunity to observe hundreds of instructors and thousands of students in my seminar teaching travels, it is my opinion that most practitioners learn movements with no understanding of the underlying principles. Forms (Katas), training drills, wooden dummy, Chi Sao, etc., are all tools for developing an understanding of particular aspects of a system and to develop those fundamental skills. When you are in a fight leave the exercises at home and depend on your skills you have developed via those tools. If you merely mimic movements and think that this will get you by, understand this … You will have second hand martial arts, not true fighting skills by copying and mimicking. Also, nothing in a street fight is predictable. Merely copying and learning mechanical movements will lock the practitioner into a rigid format making he or she unable to adapt to situations spontaneously as they unfold. If you set out to truly understand a “system”, it is highly possible if not probable that one day you may become better than your instructor. That should be every instructors goal… To have students better than he or she is.

Instructor ego can also hamper the propagation of combat arts. Unfortunately there are too many instructors who feel the need to be “One Up” on their students in perpetuity. If the arts are to grow, it is each instructor’s DUTY to make the next generation of martial artists better than the current generation. It is not a disgrace to develop a student that is better than the instructor. It is actually a tribute to the instructor’s teaching ability. Like a good parent raises his or her children to be independent, so the martial arts master should endeavor to develop students that can be independent. If the relationship is strong between the student and instructor, the student will always respect and admire the instructor because of the caring and knowledge that the instructor has imparted.

TWO REASONS IT IS A STRUGGLE TO KEEP COMBAT ARTS ALIVE

Two primary reasons that Combat Martial Arts advocates are struggling to keep combat quality Martial Arts alive are, money and liability. Instructors often become businessmen (or business women) being more concerned with making money than running a quality program. Instructors must make money to keep the doors of the school open but a balance must be struck. Each instructor must ansk himself or herself what they want their martial arts legacy to be.

Many instructors change the structure of the training to meet what the general purchasing public wants, as opposed to what they need to acquire competent skills. Because some instructors do not want to scare off potential paying customers/students, they shy away from incorporating anything that might be uncomfortable or intimidating to potential students. In essence, the inmates are running the asylum. I have seen many people who say they want to learn a fighting art. The problem is that they don’t want to get hit or get a bump or bruise to do so. Bumps and Bruises go with the territory when learning to fight. There is no easy way out. If you want to be a fighter, you have to fight. This is a problem for some students and unfortunately has great influence on how instructors set up their curriculum. The bigger the school, the more money it takes to keep the doors open and unfortunately the more concessions are made within the training. In truth, the training hall or school is the place where the student should face his or her fears and learn to cope with them. It is too late once they are attacked on the street to practice or learn these skills.

The fear of a law suit is also a deterrent to instructors who would like to teach a more street-wise curriculum but are afraid of the possible liability consequences. We live in the most litigious society in history so that is a real concern. In our society it seems that no one is allowed or expected to take responsibility for their own actions. FACT … If you practice a contact activity, you may be injured. FACT… in America, anyone can sue anyone for anything at any time! In the US we have 10% of the world’s population and 90% of the worlds lawyers. Even if the instructor has done nothing wrong, he may spend years and thousands of dollars in court proving it and even then the outcome is uncertain. This is undoubtedly a major concern to instructors, and for good reason. Instructors, who are trying to pass on something of quality, do not want to lose the family home and bank account in the process. The bottom line is this. The more business becomes the primary consideration, the less the combat martial arts are passed on.

NECESSITY IS THE MOTHER OF INVENTION

In centuries past, there was a more impending need for hand to hand fighting skills. Currently (in the US anyway) many people simply don’t feel the urgency to acquire these combat skills. (Note: In the US, citizens for the most part live in a fantasy Bubble. We get annoyed if a cell phone call is dropped. In some countries people wake up and think… I hope they don’t cut off my head today.). Less people are inclined to enroll in the more imposing courses teaching combat skills. If the perceived need diminishes, the demand will diminish as well. We actually should be seeing an increase in demand for combat martial arts. The police and the courts can no longer be depended on to protect us. Because of that, it is important that each person take responsibility for our own safety. Competent fighting and self defense skills are part of that process. In the years ahead, it is probable that the demand for combat training will increase. The question is, will the Martial Arts still have enough competent combat instructors to fill the need ?

To the instructor … Instructors should be honest with students as to whether they are teaching a Sport/Recreation, form of martial arts or a combat form. Styles that stress long range / high kicks are usually ineffective on the street. Most fights happen close in and face to face. You won’t have time to stretch out or change into lose fitting clothing. Also, when you lift your leg high, you lose mobility. This is the “Kiss of Death” when dealing with a larger attacker or with multiple attackers. What looks good (fancy and elaborate techniques) is not usually practical in the real world.

Simple, direct, and to the point applications work best in combat. Do you want fancy, or do you want to survive? The choice is yours. Nothing in life is free. There is no magic formula and no secret potion. Sweat, hard work, some risk and a competent instructor in a combat approach is the only way to achieve combat readiness.

All systems have a base of core principles and concepts that make it unique. A true understanding of those principles is the only way to reach your maximum potential and to make the art you study an intricate part of your being. Mimicking movements and doing Forms/Katas will never in itself, never make anyone a competent fighter.