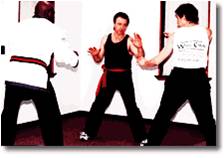 Individual techniques by design and definition have inherent limitations. According to Webster’s Dictionary, technique is “The manner in which technical details are treated as… (e.g.) physical movements that are used by a dancer” or “the ability to treat such details or use such movements”. They are further defined as, “a method to accomplish a desired aim”.

Technique is essentially a movement confined to accomplishing a specific purpose. In technique driven martial arts, this is usually… Block “A” is used to counter Kick “B”. This is evident in the pre-arranged sets used in many commercial martial arts schools. The problem and limitation of this format… the mugger may have missed class the day of that lesson. He won’t know the routine and will not respond in the way the student has practiced.

Concepts are defined as, “Something conceived in the mind” or ” an abstract idea generalized from particular instances”. Concepts address principles of movement and occupation of space and therefore provide greater latitude in adapting to various situations. This format is ideal for both fighting and for establishing guidelines for life. In conceptually based training (e.g. Wing Chun) we would say… This is how a circular attack (hook, round-kick etc.) will behave when entering the upper left zone (left side, head and shoulder area). In solving that problem, one of the principles that will govern your response is “Occupation of Territory”. In pure physical terms, since no two objects can occupy the same space at the same time, you must use the most economical Wing Chun position to fill up thereby closing off that window of opportunity.

In conceptual training, the window through which the attack will enter becomes the primary issue. Not the particular attack (hook, round kick, spinning backhand, etc.). The particular attack lacks importance, therefore, a specific counter for that particular movement is not required. In this example, the important concept to understand is “Occupation of Territory”.

EVERY ENCOUNTER IS UNIQUE

No two situations are ever identical. No two attackers will deliver a punch or a kick, or even approach you in the same manner. This means that to effectively defend, you must be versatile and adaptable. This is more difficult if not impossible when someone is locked into a Technique Driven Mindset. Fixed training sets will rarely address the specifics of an unrehearsed street attack.

Another drawback with a technique driven methodology is, you must determine what the attack is (what kick, punch etc.) and address that specific attack with the appropriate defense. This costs valuable micro-seconds.

Real fights are unpredictable. Life itself can be unpredictable. For this reason it is imperative that you are able to, cover as many possibilities at one time as possible, have an early warning system for detection, close off windows of opportunity, and be able to change direction in the blink of an eye. Wing Chun provides for these. This is because Wing Chun deals with how the energy, present in a movement, behaves (in both its intensity and direction). Wing Chun does not focus on the specific “technique” that the attacker uses.

Over the decades, I’ve heard more than a few instructors talk about how they, “mixed styles” to come up with an “all new system”. If in fact these people understood what a system is, they would be embarrassed to make that statement. Every system is based on certain concepts that make it work. In most cases, mixing systems will actually create conflicts between the basic principles that make each system unique. When this happens, all included systems are reduced to “Technique Driven Systems” regardless of what they were before.

If someone mixed Wing Chun with Taekwondo-do (Both Fine Arts) in an attempt to create a new hybrid style, it would not work. Mixing the two conceptually different systems would create contradictions. The result would be disastrous. For example; Wing Chun practitioners are taught not to defend by pushing their hands across their body (like a windshield wiper) when defending an attack. In Wing Chun, the concept of occupation of territory would indicate, for example, placing your hands in the middle between yourself and your opponent while sidestepping the attack. In Taekwondo-do, traditionally, the hands block across (like a windshield wiper) and the footwork will usually carry the practitioner in and out. In order to combine these two styles, you would have to either teach students contradicting principles or scrap the principles all together. Now, all you have left is a mishmash of techniques with no connecting framework. Both systems have will have lost their uniqueness and the byproduct would be a “Technique Driven” system (I call that a “Junk Pile Style).

We live in a “Fast Food Society”. People want instant coffee, fast food, and drive through, express service. The easy choice in studying martial arts is the technique driven method. It is easy in that the student doesn’t have to understand any principles and/or concepts. Simply mimicking movements will do. The student may even become a decent fighter if he or she has a lot of natural ability. The downside is, the student more often will plateau much earlier in training and if he or she lacks significant amounts of natural ability, he or she may never be able to beat their way out of a paper bag with an ax.

One other consideration… In your entire life, hopefully, a very small amount your of time will be spent fighting. It is, therefore, a terrible waste, if you cannot use your art to enhance the quality of your life in other ways. A technique driven art gives few tools to help you solve the challenges of daily life. A concept driven art is rich in these benefits.

NOT FOR THE LAZY

Wing Chun and other concept driven arts are not for the lazy person. As well, it may take a little longer at the beginning to see progress. In the final analysis, however, the sky is the limit. Skills will grow year, after year, after year.